When it was revealed that the Fort Lawton grounds were to be up for grabs, Indians among the urban landscape descended upon it for a clear reason: to right the social ills and disparities they were experiencing. Though the takeover "signified a symbolic and actual reclamation of land," it had very pragmatic motivations. From the beginning the urban Indian community wanted a space that could meet their needs: facilities for sanitation, healthcare, and education; space for fishing and transportation; and scientific research centers. These demands were not only bring light to the social conditions experienced by most Indians on reservations, but also explicit "descriptions of conditions of urban inequality."7

Though the Indian dream was called "grandiose," it brought the public's attention to Urban Indian issues that were long ignored. In particular it allowed for the articulation of why these concerns were different, though equally impacted by the underlying racism of the region. Bernie Whitebear explained that most social programs at the time were oriented toward Blakc people. "We don't want to transfer from white paternalism to black paternalism ... If anyone would study what we are trying to say and compare it with the existing reservations, they wouldn't see any similarity. And if reservations are so distasteful, why doesn't the government live up to its treaty obligations to provide healt hcare and education?" The stark contrasts between White society and Indians living on reservations was quite apparent, even to the metropolitan areas as evident by abundant commentary in the press on the dilapidated state of some reservations. These were even more apparent to Urban Indians as they seemed to face the same inequities, but without the assurance of a land base.

Turtle Pittman (Nez Perce) describes her childhood in Seattle and her perception of race relations in Seattle during the late 1960s and early 1970s. She provides a memory of when her family encountered racism directed toward them. Find the full interview here.

Racially charged rhetoric filled the air around the events taking place over Fort Lawton. Eventually, this was utilized by the United Indians of All Tribes (UIAT). Chief among the concerns of the non-Indian entities wanting to procure Fort Lawton was the creation of a park to preserve the environment. This image was used to juxtapose the administration of reservations, which abounded in negative imagery. The Indian activists saw this and introduced their own concepts of public space and nature, the two notions driving non-Indian proponents to prevent the park from falling out of their hands.

"White liberals hoped to balace the good life with the changing metropolitan region ... In Contract, the Indians at Fort Lawton forcefully articulated concerns of the very groups who had been most excluded from this metropolitan project ... the UIAT claimed that 'The first thing the [UIAT] want to do with Ft. Lawton is set up an 'environmental' preserve which will help teach whites 'how to stop destroying the earth,'" a jarring statement to those who believed their actions were preserving the local environment. By manipulating the trope of the "ecological Indian" in this ideological war, the UIAT played on the preconceived notions that were born from racism held by White residents of Seattle.8 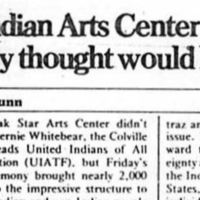 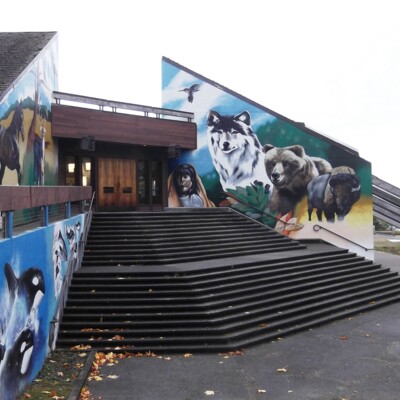 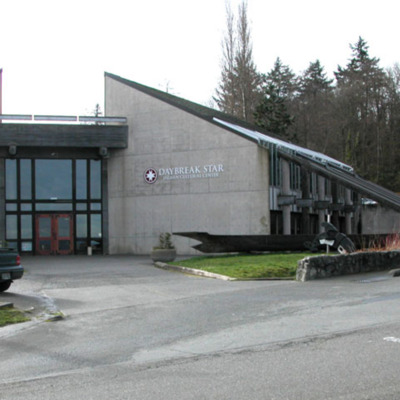 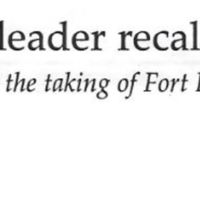 After several occupations, many arrests, and months of protests, the Urban Indian community of Seattle was able to successfully negotiate a lease for several acres of Fort Lawton property. Upon these lands they built the Daybreak Star Indian Cultural Center--a space to host social programs, cultural events, and spiritual practices that opened in 1977. Though it was not the entire property, the voice of the Indian community in Seattle had been heard. "Just as Whitebear had argued, Daybreak Star became a place where Indians could be, but, more importantly, a place from which urban Indians could organize politically and culturally, close to the natural setting."9

"Reflecting on his life, he says the invasion of Fort Lawton was the culmination of years of struggle ... Poverty had forced thousands of American Indians off reservations and into cities. With no access to federal benefits, many got stuck in the urban centers with no money or prospects ... In the end, Seattle and the federal government agreed to negotiate. In November 1971, the city agreed to set aside 20 acres for an Indian cultural center in the new park."

While the United Indians of All Tribes and Urban Indian community were victorious, did the racial conditions that led to this social upheavel improve? The Magnolia Neighborhood was considerably secured in the city stratification. Consisting of mostly wealthy White families, the desire for a park was meant to "help demarcate the city's upper- and middle-class neighborhoods from working landscapes,"10 with the fort originally being used to create an atmosphere of order among the natural landscape and to "halt lawlessness." Unfortunately, much of the White population proved to be at odds with the Indian desire for self-determination as both covert and overt racism continued to be peddled by the press and regularly expressed during a period fraught with conflict between White society and Indians.

Excerpt from an interview with Joseph Utzler (Diné/Navajo) describing his experience growing up in Seattle and his perception of race relations. He also shares his knowledge about the support shown by non-Indians in the Magnolia Neighborhood. Find the full interview here.

Yet, this segment of the public largely showed support for the supposed "plight" of the Indians. While larger organization who had been keen on obtaining the property for several years clashed with Indian activists, the general public routinued rallied behind the minority demographic. The Magnolia Neighborhood was no stranger to progressive values. It was the very same citizen and environmental groups that fought to prevent the "proposed [anti-ballistic missile] base and to advance the park cause." Even though they were at odds with Indians over the exact use of the park, they shared the sentiments of wanting to preserve the space for something other than a destructive military fort with a pristine natural environment being a top priority.

Much of the public support for UIAT and the Urban Indian community can be traced back to the relationships and coalitions built in the fight for civil rights and self-determination. The appearance of celebrities also bolstered national and international recognition for the challenges Indians were facing. In a somewhat ironic twist, even the press coverage is responsible for garning positive support for the fight of Fort Lawton.

"The UIAT demonstrations at Fort Lawton had successfully captured the interest and imagination of the press and the public. While some opinions expressed in the newspapers were hostile or indifferent, many news articles effectively informed the public about the challenges facing urban Indians in Seattle, and sometimes called for public support. Many Seattle citizens and organizations sided with the UIAT, and successfully pressured politicians to listen to the activists’ claims and strike a compromise."11