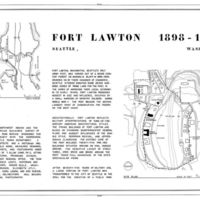 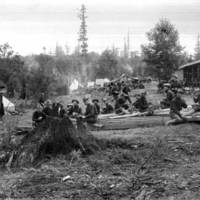 In 1898, the United States established a military fort in Seattle, Washington in the area that is now Discovery Park in the Magnolia Neighborhood. The land was provided by the Chamber of Commerce and was procured through several land acqusitions and donations from city residents. This fort served as an army outpost for the city and a sign of order being brought to a region believed to be plagued with disorder. Though initially more of a staging ground than a supreme fortification, Fort Lawton would grow into the second largest embarkation site for troops along the West Coast during World War II and an Army Reserve location during the Korean and Vietnam Wars.

In the 1960s and 70s, urban locations through the United States experienced a resurgence of "beautification" initiatives aimed at accommodating metropolitan growth, an expanding middle class, and desire for "open space" in increasingly overcrowded population centers. In Seattle, local organizations of environmentalists, business leaders, and civil engagement personnel sought to utilize the Fort Lawton grounds, much of which had been left as a forested area, to fulfill their visions of bringing "order to a disorded urban environment."1 On April 24, 1964, 85% of the Fort Lawton land was declared "surplus property" and became available. Yet this transfer would soon be contested by Army in 1986 as the Vietnam and Cold Wars gave rise to a renewed interest in the location. In the same year, Senator Henry M. Jackson dissuaded the military from repurposing the fort and sponsored legislation to have it transferred to Seattle under its "Legacy of Parks" program to be turned into the city's largest park--Discovery Park.

Video clip from As Long as the River Runs (1971) containing footage of American Indian leaders and activists expressing their concerns over the wealth and health disparities they face in Seattle, attempting to negotiate for the lands of Fort Lawton to be the grounds for facilities to meet these needs, and occupation of fort grounds.

With mounting public interest in the Fort Lawton grounds between local residents and a resurgence of military concerns, another sector of the population had been observing the utility of Fort Lawton. American Indians located in Seattle and from the surrounding areas were increasingly asserting their rights under the momentum generated by the Red Power Movement. Washington State had been fraut with conflict over treatment of American Indians and an increasingly brighter spotlight was being shown on the issues urban American Indians were facing, caused by years of discrimination and marginalization spurred on by the neglect of the federal trust responsibilities to Indians.

In 1969, Indian activists occupied Alcatraz Island off the coast of San Franciso to call attention to the disparities urban Indians were facing in the Bay Area, becoming a touchstone event for the Red Power Movement and providing the political rhetoric used throughout subsequent takeovers. Using the 1868 Treaty of Fort Laramie as the basis for the action, it was argued that Indians have a right to unused federal property that was previously under Indian ownership. As such, the island was claimed by "right of discovery."2 This reasoning was soon adopted by other local movements and organizations, including those that would soon act on Fort Lawton who purportedly based their claims on the 1855 Point Elliott Treaty. Members of the American Indian communities in and around Seattle quickly rallied behind local leaders to fight for the return of this land to Indians to combat the growing social inequities being faced in the urban landscape of Seattle. Determined to be heard, people began to organize.

Article in the Seattle Times reporting on the aftermath of the initial occupation. The full article describes how Indians were reportedly "beaten both while outside Fort Lawton and after being held in cells at the post" despite Indians contending "they have a legal right to any unused native lands."

The Seattle Post-Intelligencer reports on the initial takeover of Fort Lawton by Indian activists the day after its occurance. The full article image depicts Diana Joy Eneas (Nez Perce) being carried away by Military Police after she scooped up a child that was caught in the midst of arrests.

The occupation caused a standstill in the negoiations for the park as it became apparent that the Urban Indian communities would not let the park fall into the hands of those that would ignore their claims. The Associated Press reports further attempts to occupy the grounds after weeks of picketing and protests.

On the morning of March 8, 1970, a group of Indians--men, women, and children--gathered on the beaches of the Salish Sea (Puget Sound) on the outskirts of the Magnolia Neighborhood. At approximately 6:30am, the group broke from cover and moved onto the fort grounds. According to a reporter from Seattle's leading underground newspaper the Helix, who was with the group this morning, "a small teepee is set up and a warming fire is built. Full of high spirits the Indians dance and chant to celebrate."3 The Indians then proclaimed:

"We the Native Americans re-claim the land known as Fort Lawton in the name of all American Indians by the right of discovery," asserting that the fort "is more suitable to pursue an Indian way of life ... By this we mean 'this place does not resemble most Indian reservations.' It has potential for modern facilities, adequate sanitation facilities, health care facilities, fresh running water, educational facilities, fisheries research facilities and transportation."

The group responsible for this takeover was the United Indians of All Tribes (UIAT), an Urban Indian organization dedicated to advocating for Indians located in Seattle, with Bernie Whitebear as its president. Whitebear and Bob Satiacum would come to organize the efforts to occupy the Fort Lawton grounds.

After making claim to the land, the stationed military forces moved in to evict the 30 or so Indians that had scaled the fences. By this time, there was some 100 supporters that had gathered and began to storm the fort "from all sides," according to the Seattle Post-Intelligencer. A 40-man platoon of the 392 Military Police Company arrived and as the occupiers began to scatter, the soldiers decided to arrest them under commands from their sergeant. Armed backup arrived from Fort Lewis and they were supported by Seattle Police officers. Outside the gates was a growing crowd Indians and non-Indian allies that cheered on the occupying party. Soon the initial group would be disbanded.

On March 12, another attempt was made to occupy the grounds. Another large group of Indians snuck in from the bluffs of the fort to erect a teepee, start a fire, and begin a drum circle. Randy Lewis, another prominent Urban Indian, explained how soldiers in riot gear descended upon them and that the occupiers went limp in nonviolent protest so as to avoid a harsh beating. The soldiers rounded them up and threw many in the stockade.

A third occupation took place on April 2, 1970. After an atmosphere of defeat had developed around the organizers of the occupation, efforts were made to tone down the incursions onto the grounds. It was decided the day before the final occupation to take down the protest camp sites. As the sites were being dismantled, about 50 Indians rushed past the guards of the main gate, scattering throughout the fort. Military Police made immediate arrests, shutting down the takeover attempt. Though it had already been decided that a change of tactics was necessary, this final attempt to storm the grounds signaled the end of the direct action takeovers of the fort.

In the following months, the UIAT and their allies would continue to protest the transferring of Fort Lawton to entities that would continue the historical neglect of American Indians by holding rallies, drum circles, and negotiations. While a quick seizure of the property did not yield an instant acquisition, the Fort Lawton Takeover galvanized Urban Indian efforts to gain justice and brought them the public support needed to eventually have their dreams materialized.