The events of the Fort Lawton Takeover occurred during a tumultuous time in the United States and during a period known to American Indians as the "Termination Era." While social movements began to ramp up and attrack public attention to the neglect of and discrimination against minority groups, the United States felt it necessary to completely alter the relationship it had with Indians: the federal government would "terminate" its government-to-government relationship with Tribes, effectively dismantling the doctrine of trust responsibility. Washington State was among the top selection of states to inact termination policies. Beginning in 1953, the federal government committed itself to a new way to "solve" the "Indian Problem."12 This strategy involved:

Needless to say, the policies of the Termination Era were a "disaster."13 By the time of the Fort Lawton Takeover in 1970, American Indians were still recovering from the legacy of termination. It was in the shadow of these termination efforts that the Red Power Movement and fight for self-determination followed. But while the federal government began to experience the ostensible "pendulum effect," the state governments (and many of their residents) continued a long trend of balking the idea of Tribal sovereignty.

News outlets began covering extensively the confrontations occurring over Indians exercising their treaty rights, particularly around fishing on usual and accustomed grounds outside of Indian reservations. This article from The Seattle Times depicts an armed Indian man, Hank Adams (Sioux-Assiniboine) at Frank's Landing, a well known fishing spot along the Nisqually River that belonged to Billy Frank, Jr. (Nisqually).

Violence broke out all over Western Washington when Indians asserted their right to fish. In September of 1970, there was a shootout in Tacoma, Washington reported by the Associated Press. This took place just several months after the Fort Lawton Takeover. 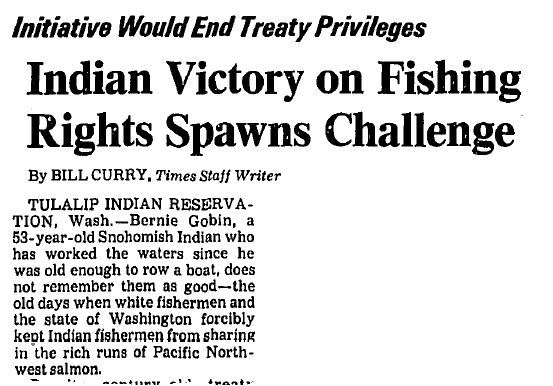 In Washington State, violence against Indians almost felt like the norm. Indians on the reservations were often prevented from exercising their treaty rights freely and even attacked by state official asserting their supposed authority over Tribes. The Tribes of the Pacific Northwest were locked into a battle primarily over their right to fish their usual and accustomed (U&A) grounds that existed outside of reservation boundaries. Indians continued to exercise their right to fish despite repeated attempts by Game Wardens and regulatory agencies to stop them. As Indians began practicing "fish-ins," acts of civil disobedience where groups would establish fishing camps and begin fishing in defiance of state laws and regulations, these clashes escalated to arrests, beatings, and even shootouts.

"Police used tear gas and State Game Department officials used clubs to break up a force of about 30 Indians armed with guns, knives and fire bombs ... Fisheries officials had said the Indians ... are fishing with illegal nets and equipment ... 'If anyone lays a hand on that net, they are going to get shot,' said Romona Bennet, a member of the Puyallup Tribal Council."

Although the Urban Indian community of Seattle would gain a victory in the fight for Fort Lawton, the war over fishing rights in Washington was far from over. It was in 1974 when Indians were successful in affirming their treaty rights when the Supreme Court issued a verdict in their favor, a win that would come to be known as the "Boldt Decision."

"The 1974 Boldt decision in U.S. v. Washington was vindication ... By acknowledging and providing federal support for Native Americans’ equal share of the fisheries, as well as providing for native regulation of their own fisheries, it answered every one of the group’s demands. However, the decision increased the violent opposition of the other groups who were most affected by it – the white commercial and sport fishermen. Future cooperation and compromise would still be required, but now it would be conducted on a more level field, without as much of the power differential that existed before. The Boldt decision was subsequently upheld by the Supreme Court in 1979, and still holds as law."14

In time, challenges to this ruling would come and further acts of violence were sprung onto Indians. The positive support for Indians generated by the Fort Lawton Takeover must be seen in the great context of the region. While some were willing to lend their hand to Indians, many others wanted nothing more than to continue the oppression Indians were accustomed to. The Red Power Movement reimagined the Indian that was supposedly destroyed in the Termination Era, causing dissonance among the general non-Indian public that was used to the stereotypical depictions of Indigenous Peoples. This meant that while there was certainly progress toward an equalizing of social being for Indians in Washington State, there would continue to be obstacles in the way of true self-determination.

As conflicts over fishing increased, violence befell those at Frank's Landing on the Nisqually River.

The violence seen at Frank's Landing would soon escalate into arrests by state officials.

Eventually, shootouts began to happen during the "fish-ins" organized by Tribes who saw a need to have armed guards while fishing.