Urban Relocation: From the Reservation to Seattle 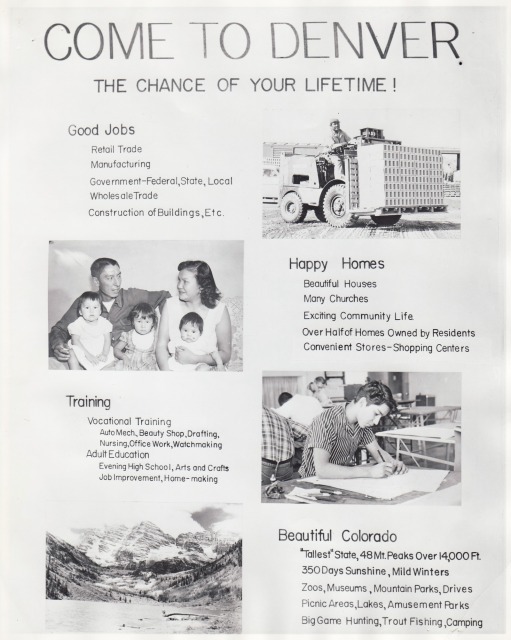 As urbanization ramped up after the conclusion of World War II and efforts to modernize were focused on rural communities, the federal government targeted Indian reservations to cause this modernization through assimilation. During this period the government folded these efforts into their newly established "termination" policies, creating programs and resources meant to relocate American Indians from reservations to urban centers throughout the country, fitting historical "Patterns of Removal" where the government tried to previously solve the "Indian Problem." Cities designated as relocation destinations included Los Angeles, Chicago, Denver, and Seattle. These programs started in the 1950s and continued through the 1960s. The relocation programs of the Termination Era are partially responsible for the social disparities that Urban Indians encountered in these metropolitan areas.

"BIA pledged assistance with locating housing and employment. Numerous American Indians made the move to cities. They struggled to adjust to life in a metropolis and faced unemployment, low-end jobs, discrimination, homesickness and the loss the traditional cultural supports."

These programs caused a major shift in the locality of Indians. While many had previously resided on reservations, a 1956 relocation program saw that nearly 100,000 reservation Indians were placed in various metropolitan centers. Due to the widely unsuccessful programs that led to unemployment and poverity, as much as one third would return home in the years following their initial relocation.15

"...government programs encouraged tribal members to relocate to cities where it was thought they would be forced to assimilate to Western culture. [Bureau of Indian Affairs] propaganda of the time showed Native Americans proudly working in factories and enjoying all the luxuries of the modern 50s life. In return for giving up reservation life, the BIA offered free job training, medical care, and housing for one year."16