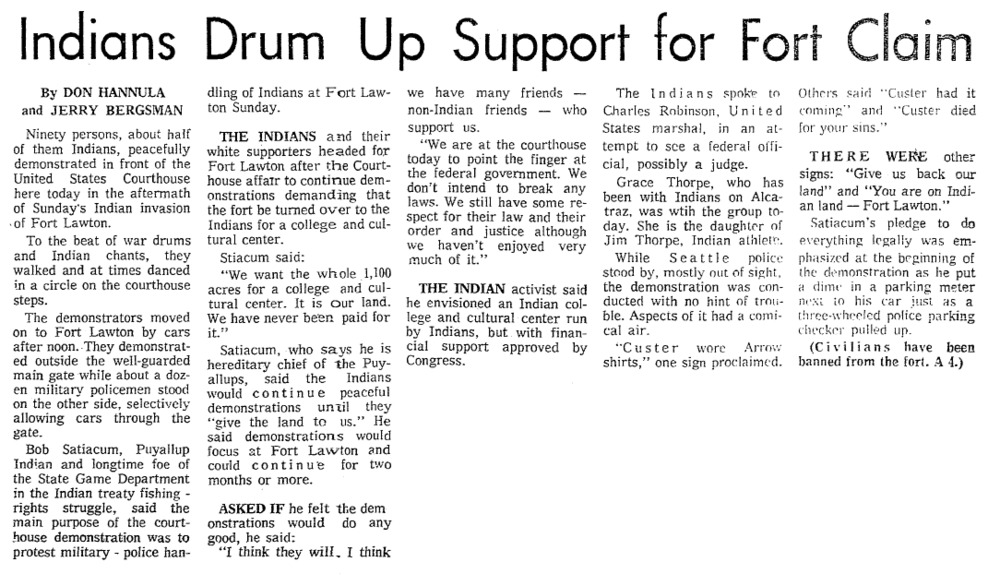 Throughout the period known as the "Fish Wars," the extensive press coverage of protests and demonstrations both benefited American Indians and presented them in the typical marginalizing light beaming from a colonialist lens. The media frequently propagated stereotypes and pushed discriminatory narratives underpinned by racist sentiments and tied to the building tension in the region. The Fort Lawton Takeover was not exempt from this type of coverage.

"Seattle newspapers played up what they saw only as an absurd spectacle with playful and casually racist headlines such as 'Indians Drum Up Support for Fort Claim' and 'MP Now knows 'How Custer Felt': He Shouted 'Stop' But Indians Swarmed Into Fort.' Journalists emphasized the drama of the invasion and subsequent occupations that early spring."4 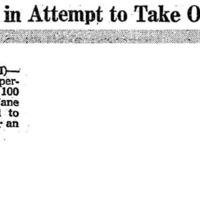 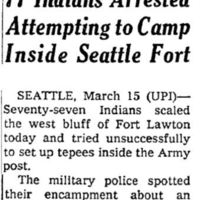 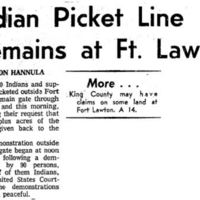 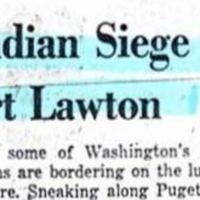 Much of the press coverage attempted to retain a level of journalistic professionalism when reporting on events happening around Fort Lawton. However, headline tags often played on the trite and generic Indian from Hollywood depictions and stereotypical anachronisms reminiscent of old Western movies. The headlines, terminology, and overall framing of the events in these articles frequently perpetuated notions of Indians that proved to align with how the majority White population of Seattle was primed to perceive Indians at this time: that Indians and cities do not mix. This reinforced public sentiments that Indians did not have claims to urban areas--sentiments that were echoed by the press through their constant beratement of the activists.

Examples of the framing presented in these articles includes the regular identification of activists as simply "Indians" and the positioning of American Indians as antagonists. Many articles tied the demonstrations and incursions onto the fort grounds as invasions of military posts, calling to mind images of war parties and Indian raids along the frontier during the long past Indian Wars.

Though many of the more mainstream press outlets displayed subtle racism in the form of stereotypes and insensitive language, other media entities did not mind being overt themselves or did not mind hosting overtly racist content. For example, the Bremerton Sun published an editorial arguing against the return of any Fort Lawton property to Indian activists. This argument was predicated on the observation that "it might behoove some of those Indians ... to go home and improve those reservations" as they "are areas of rusting automobile bodies, deserted homes with windows broken out, and various garbage and debris strewn about." Sadly these talking points of anti-Indian agitators were prolific during this time period as the desire to assert Tribal sovereignty and treaty rights continued to grow among Indians, both on the reservations and within urban environments.

Excerpt from an interview with Joseph Utzler (Diné/Navajo) describing his the racial tension in Seattle around the time of the Fort Lawton Takeover based on his knowledge of the event. Find the full interview here.

This piece in The Seattle Times brings attention to some of the factors that contributed to the situation at Fort Lawton and the rising movement to assert Tribal sovereignty and treaty rights, such as the failures of the federal Indian policy that emphasize "the plight of America's aboriginal people."

Despite the shocking title, this editorial, published by a college newspaper known as the City Collegian, sought to encourage support for Indian claims over Fort Lawton and call attention to both the current and historic injustices done to American Indians by call on Seattle Community College to lend institutional support or be culpable among those committing these injustices.

Fortunately, not all press coverage was abysmal. Several outlets provided both journalistic reporting and editorials that voiced support for Indian activists and the fight for Fort Lawton, using the events as an opportunity to shed light on long standing disparities and neglect of Urban Indians. And while there existed an abundance of problematic aspects to the coverage overall, many outlets captured the vocal nature of the activists and Indian leaders, bringing further awareness to the struggles being faced in urban locations.

"The Seattle Times and the Seattle Post-Intelligencer, the two largest mainstream Seattle newspapers, covered the demonstration extensively. Both publications gave regular updates throughout the next several weeks of the demonstration, as well as developments in the UIAT’s subsequent negotiations with the government for ownership of the surplus land. They helped give American Indian activists a voice, a chance to tell the public in their own words why they were there on the fort grounds."5

This created substantial political pressure that galvinized the movement and rallied public support on the side of the Indians. On a national level, the journalistic reporting was also being reshaped in a manner that helped to curb previous stances propagated by the press meant to encourage the assimilation of American Indians.

"In the late 1960s, the rhetoric and policies began to change from termination to 'self-determination,' a movement in favor of the Indians taking control of their lives, institutions, and celebrating their cultures. The news reporting style of that time became highly descriptive, interpretive, and investigative, delving deeper into American Indian issues and including their voices and opinions in the coverage."6